Brexit – How we are helping our members to prepare:

FinTech firms in the UK are getting on with business as usual, despite the ongoing uncertainty surrounding Brexit. We sent out our Brexit Preparation Survey over the summer to provide insight into the preparedness of the fastest-growing sector of the UK economy, as it prepares its members for exit from the European Union.

Our survey asked the FinTech community (both members & non-members) about their current planning. The information obtained was used to shape discussions with the government. Key statistics from the survey include: 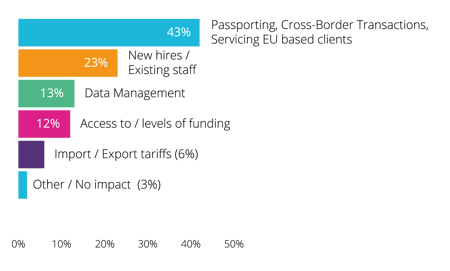 UK FinTech continues to go from strength to strength, with record investment levels into the sector in the first half of 2019, despite all the political uncertainty. While Brexit is a risk, it is somewhat mitigated by the ability of nimble FinTech’s to act quickly and pivot. That said, our members are clearly eager for Brexit to be delivered without a cliff-edge scenario that will put their prospects in flux.

Innovate Finance, as the voice of UK FinTech, is determined to support its members during this challenging time, by distilling and passing on information given to us from Government, professional services firms and regulators.

That’s why we have been in constant communication with Government and regulators over the past weeks and months, ensuring we can provide the information and support you require. 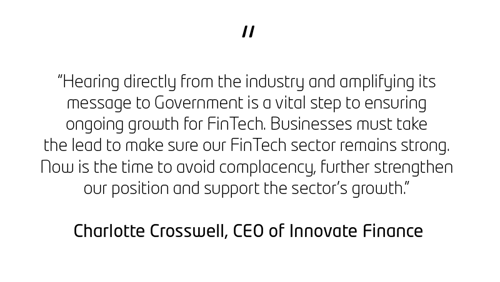 As part of our ongoing preparation, Innovate Finance and Hogan Lovells co-hosted a Brexit focused roundtable with FinTech companies to share and discuss their key preparations, considerations and concerns in planning for Brexit.

Charlotte also contributed a compelling opinion piece in City AM earlier this week, urging industry to take the lead amid the unpredictability: “Innovation has enhanced global respect for the UK’s finance sector. It is vital that the industry does not allow itself to be delayed and distracted by political turmoil. Instead, we must embrace FinTech’s key role in the economy, be bold about the future of the sector, and set the foundations for economic success in years to come.”

Keeping in touch with Government

Last week our CEO, Charlotte Crosswell, joined discussions between senior City stakeholders and the new Chancellor, Sajid Javid MP. On behalf of our members, she raised a number of points reflected by early findings from our Brexit preparation survey, and on-going conversations with the community. Key points stressed included:

Charlotte also attended EST discussions earlier this week between Trade Associations and Economic Secretary to the Treasury John Glen MP, as well as many other key government officials. Charlotte raised a number of important concerns including:

To read all the key agenda points and a summary of the meeting, click here.

The Financial Conduct Authority (FCA) is also stepping up its efforts to ensure firms are aware of what they need to do to prepare for the potential of a no-deal Brexit. To help firms prepare, the FCA will be running a series of digital adverts signposting to the FCA Brexit webpages, and has set up a dedicated telephone line (0800 048 4255).  This is the most recent phase of the regulator’s preparations for a no-deal. The FCA is urging all firms to consider the implications of a no-deal exit and finalise their preparations

We welcomed the news on Wednesday that Government decided to reverse the earlier curb on post-study work visas, meaning international students can now remain in the UK for two years after finishing their studies.

We had worked tirelessly with our members and campaigned alongside other trade bodies to support this change, raising it as key to the FinTech sector’s continued success in all our recent discussions with Government ministers and officials.

As your industry body, we want to reiterate that we are here to support you every step of the way over the coming months to ensure you are in the best possible position to succeed. Please do get in touch with the team if you have any questions or concerns.

Brexit Preparation & Government/Policy Update2019-09-132019-09-13https://www.innovatefinance.com/wp-content/uploads/2020/04/if-logo.pngInnovate Finance – The Voice of Global FinTechhttps://www.innovatefinance.com/wp-content/uploads/2019/09/home-carousal-temp1.jpg200px200px
Tweets by InnFin
About us
Membership
PROGRAMMES AND EVENTS

This website uses cookies so that we can provide you with the best user experience possible. Cookie information is stored in your browser and performs functions such as recognising you when you return to our website and helping our team to understand which sections of the website you find most interesting and useful.

Strictly Necessary Cookie should be enabled at all times so that we can save your preferences for cookie settings.

If you disable this cookie, we will not be able to save your preferences. This means that every time you visit this website you will need to enable or disable cookies again.